You didn't think that what I posted last week was all the swatches did you?  That was just the beginning.  Of  the first swatch.

I have previously knitted the Autumn Rose Sweater and in doing so had seen how colours could be shaded (even though I didn't use the original colours).  I had also seen how a smaller pattern could be used in between bands of a larger pattern.  And so I started experiment.

First, I started playing with shading on the flower patterns that I had taken from Sense and Sensibility.  I shaded both the blues and the pinks, using colours that were a little more "me" than those I'd used originally, even though the originals were a closer match to the colours of the book.

I also started playing with the chair pattern from Emma.  My attempts to work a full chair didn't really work especially since, the whole way through, I was trying to ensure that there were never more than 5 stitches of a single colour.  I have since worked a sweater with a stranded yoke that has far more than 5 stitch runs but I was trying to obey the "rules".  So, I looked at the chairs more closely, and saw the stripes on the seats.

Those stripes were something that I could work with and so I started playing with a pattern of diagonal stripes on a shaded green background.  The first set were too far apart, but the second set were better. 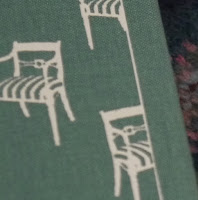 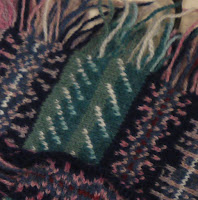 Having go to that point, I then decided to make my life just that little more difficult and bring in a third book.  Northanger Abbey has a fun design of shocking pink keys (not terribly Gothic) on an oatmealy background and I decided that this should be my third pattern. 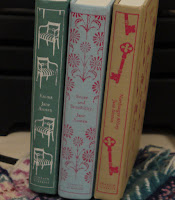 I played around with the key pattern on paper and so got to something I liked and then ... bound off.  I had a "complete" swatch, but it had all sorts of random bits and pieces in it and so I decided to start from scratch, but in a bit of rib, and then knit a swatch of the overall design.  Which I did.  And I didn't like it.  There was nothing wrong with it really but for me the balance of the colours was wrong - there was too much cream and not enough blue.  So then I turned to my computer.

I used excel to start charting my designs.  I charted what I had knitted as the overall swatch, and then I started playing with it.  I reduced the size of the keys.  I blended the blue into the green each time.  And I added a small flower "peerie pattern" in my deepest shade of pink before and after the main pink flowers each time.  And then I knitted another swatch (well actually, there was an intermediate one, but I quickly realised I didn't like it and restarted).  And so I came up with the final swatch.  The ribbing in the garment will not match this (I'm going to use 3 x 1 not 3 x 3) and I think there's the odd extra plain blue row in there, but this is the basic flow of the design.  In the picture below, the final design is on the left with the "too cream" version on the right. 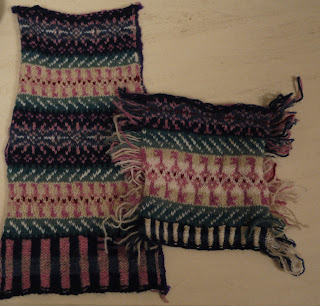 So there it is.  A colour work pattern.  Next, an overall pattern was needed.  I'll write about that next week and also post a picture of the yarn that arrived this week.   Together with what I already had, I've got waaaaay too much, and I haven't yet checked what's going on with the dye lots.  But I'm working on the basis that as long as I don't change lot part way through a section it will all be fine!